The Offshore Financial Center-Intensity Ratio is a concept that I have first proposed in my 2014 article “Privateers of the Caribbean: The Hedge Funds-US-UK-Offshore Nexus” and later elaborated in my 2015 working paper “The Offshore-Intensity Ratio: Identifying the Strongest Magnets for Foreign Capital“. This ratio intuitively shows how intensively a jurisdiction acts as an offshore financial center (OFC). All OFCs have one characteristic feature in common: they offer very low tax rates (or even zero taxation) and lax regulation to non-residents in order to attract foreign financial assets. In an IMF Working Paper Zoromé (2007) has defined OFCs as jurisdictions that provide financial services to non-residents on a scale that is excessive compared to the size and the financing of their domestic economies. I have combined data from the IMF (Coordinated Portfolio Investment Survey) and the BIS (Locational Banking Statistics) in order to roughly approximate the true size of the foreign assets booked in any given jurisdiction. This sum of foreign financial assets is then divided by the GDP of the jurisdiction. The following table displays the top 30 jurisdictions ranked according to their OFC-Intensity Ratio in 2011.

One of the most important insights the OFC-Intensity Ratio provides is that the most intensive OFCs are all under the sovereignty of the UK and the US. This empirical finding supports my argument that we should conceptualize “Offshore” as a phenomenon that has primarily been driven by (and/or tolerated by) Anglo-America. 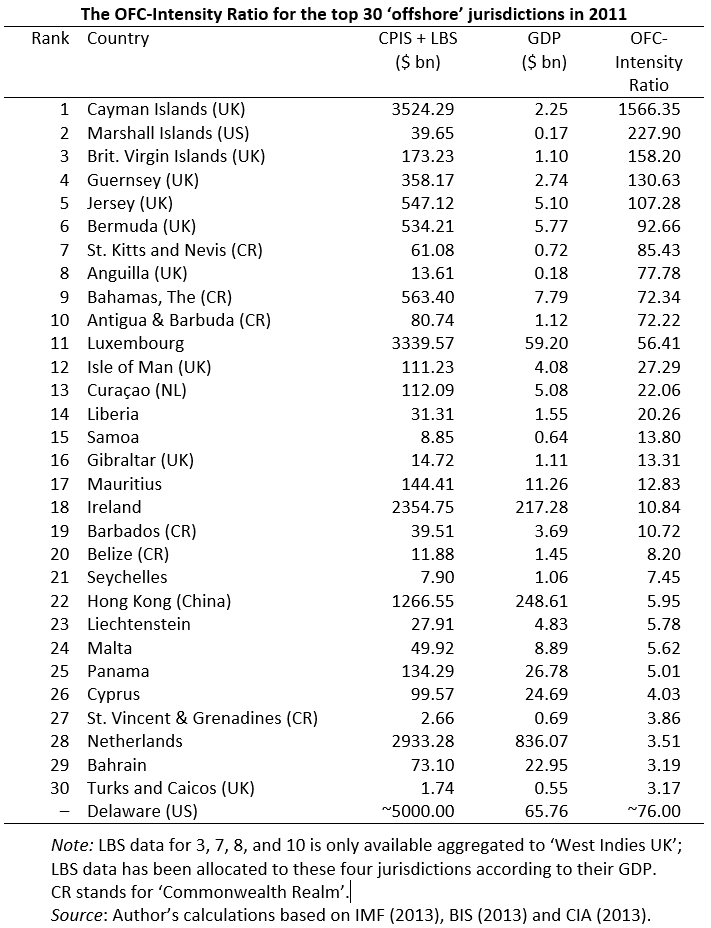